The second issue of Kin Poetry Journal is complete, and we have rolled into issue iii.  This month's featured poet, Togara Muzanenhamo, hails from Zimbabwe.  You've already seen one of his poems, "The Wine of Apes," in issue i and we shall bring you four more in the coming weeks, starting with "The Wheel Brace." 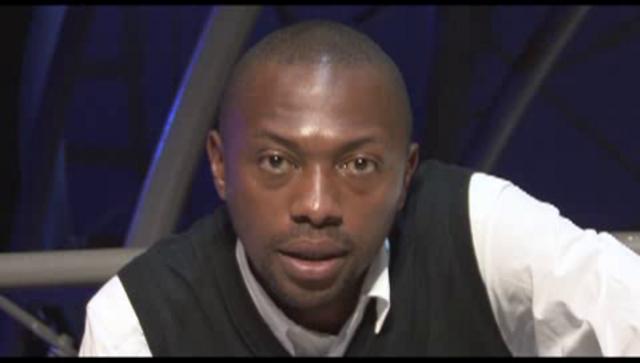 (Picture of Togara Muzanenhamo from Poetry International Poetry Clips)
In the roundup of news from Kin contributors, Timothy Ogene will be reading at different venues during this year's Austin International Poetry Festival, hosted by Barbara Youngblood Carr at venues including a retirement home.
Terese Coe has had a big summer of publications, including her poem "More," published in The Poetry Review, UK; "More" was also one of the poems copied many times and dropped by helicopter over London for the "Poetry Parnassus" event, part of the London Olympics.  “Dead Sea Scroll” and “Beyond the Possibility of Useful” were published in Orbis magazine, UK.  "Washington Square, Late Afternoon" was published in New Walk magazine.  "Deceptions" was published in The Warwick Review, UK. "Paradox" was published in The Stinging Fly, Ireland.  "Mid-Manhattan Library" was published in Crannog magazine, Ireland. "Coffee Break" was republished online at Per Contra.

Kin editor Wendy Chin-Tanner and contributor Jenna Le both have poems in the current issue of the Mascara Literary Review, a special issue with a focus on Asian American poetry.
Her fellow editors are especially proud to announce that Wendy's debut collection Turn is to be published by Sibling Rivalry Press in March, 2014.
We continue to add features to the site, and it now has a news feed, so you can follow along from your favorite news reader software, if you prefer.